The Euroregion “EUROACE” is the group comprised of three regions: Alentejo (Portugal), Centre (Portugal) and the Extremaduran autonomous community (Spain). It was founded on 21 September 2009 in Vila Velha de Ródão, with the signing of an agreement which, in effect, established the EUROACE , working community. This event certifies the three regions’ desire to reinforce and boost their cooperation.

This new agreement is the legal base for the creation of a greater Euroregion among these three regions. The idea is to begin a new period of collaboration in which they can work together on projects that are closer and more useful to citizens, businesses and society in general.

EUROACE is the first Euroregion with a tripartite nature on the Spanish-Portuguese border. The organization is not legally constituted and, therefore, possesses an open and dynamic structure, leaving the door open to all entities and organisations within the three regions, both public and private, that wish to participate.

EUROACE’s territorial range of action includes the geographical area of Alentejo, Portugal’s Central region and Extremadura. It covers an area of approximately 92,500 sq. km. in which 3,388,563 inhabitants reside (6% of the peninsula’s population).

Its territory is equivalent to almost a fifth of Spain’s land area and is superior to Portugal’s. It has a low average population density (37 inhabitants per sq. km.) in spite of its enormous territorial potential.

Its strategic location in the peninsula’s southwest, in comparison to greater metropolitan areas on the Iberian Peninsula (Madrid, Lisbon, Seville, Oporto), as well as the Atlantic coast and the continental diagonal give EUROACE a privileged status in the context of Europe’s new territorial strategy.

Its territorial structure is comprised of a broad network of medium-sized and small cities. All have an adequate supply of public services and easy access to and from other regions, which will shortly be increased by the arrival of the high-speed train. 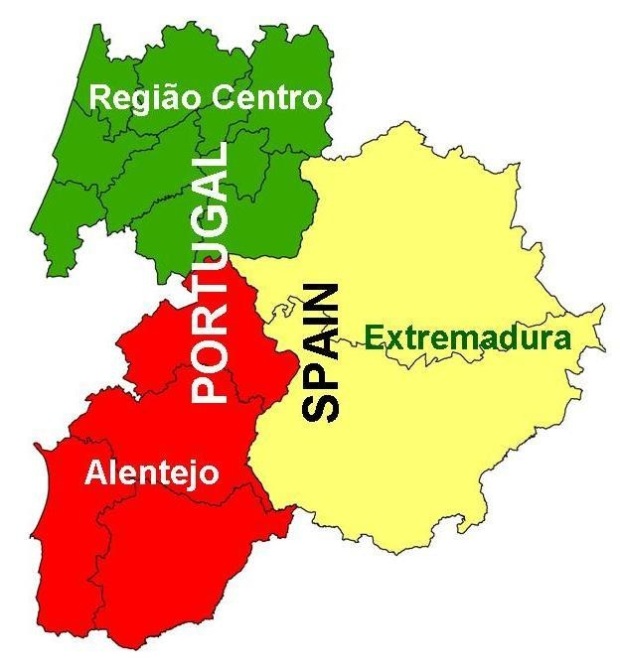 1Euroregionxweek is licensed under a Creative Commons Attribution-NonCommercial-ShareAlike 4.0 International License.